Well, it’s a wrap! The past 365 days (or should I say 366 with a leap year…as if we needed another day!) that will now live in infamy are officially over, and I think we can all agree that hindsight truly is 20/20. Monty Python famously proclaimed that ‘‘no one expects the Spanish Inquisition,’’ however, given the choice, the world may have preferred that over the Coronavirus. Throw in a hotly contested election year (is it over yet?), and we Americans have most certainly experienced our fair share of fiscal and mental exercises. Looking back, I’m sure there are many lessons learned –but who wants to dwell on the past? After all, every day was Blursday!

2020 left us with many winners and losers, starting with the pollsters, who were far from accurate on their prediction of a Blue Wave. With Republicans gaining 10 seats in the House, and the Democrats battling it out until the end in Georgia, this election was far from a landslide mandate. In spite of the extremely loud, polarizing minorities on both sides of the aisle, we are hopeful this outcome positively reflects that the general population is more centric than we are led to believe, and perhaps we all have a lot more in common with our fellow citizens than previously thought. After all, living through a global pandemic does put things into perspective and has forced us all a bit closer together. Whether participating in a front porch happy hour or a picket fence BBQ, we’ve all been encouraged to spend more time with our neighbors and engage in friendly dialogue and civil discourse.

Unfortunately, much division still remains, and much more work must be done to bring the country together for the common good. At the focal point of this divide could be the actual companies who’s stated goal was to unite people through friendship. The likes of Facebook, Twitter, Apple and Google have all been winners throughout 2020, as their stock prices soared. However, their actions and self-governance have proven to incite vs. calm, and they are more likely to come under greater scrutiny and regulation in the coming years.

Despite the horrific assault on our Nation’s Capitol, a transition is afoot, although the Blue Wave increasingly appears to be dissipating into Baby Blue, if not a ‘‘Purple Haze.’’ So far, the Biden administration’s cabinet selections have been fairly moderate, including the appointment of Dovish former Fed Chairwoman Janet Yellen to the position of Treasury Secretary. A more evenly-split government and a return to ‘‘normal politics’’ may be just what the doctor ordered for Main Street and Wall Street alike. In this environment, only things that need to happen and that are easy to pass will prevail, encouraging bi-partisan cooperation and less pork. Further stimulus is most certainly on the table, which the equity market and the 10-year Treasury are pricing in, as the 10-year Treasury rose over 1% for the first time since April.

In addition, a long awaited bi-partisan infrastructure bill could be just the ticket to spur employment and build out high speed internet to poor and rural areas, whose need became desperately apparent during this quarantine period of home schooling and cybercommuting. Let us not leave our neighbors behind.

In our previous quarterly letter, we debated what would get us across the 2020 finish line, and one week after the election, the results were clear. The vaccine is here with a neck to neck finish between Pfizer and Moderna, which both displayed astonishing effectiveness in their Phase 3 trials, with Johnson and Johnson and Astrazeneca soon to follow. While the distribution roll-out has been less than smooth, there is at least a discernable timeline to inoculate the U.S., assuming everyone will take their medicine! And although new fears of a more contagious strain have emerged, pharmaceutical companies seem assured this mutation poses no threat. This will allow our nation (and the world) to re-emerge, unleashing pent up demand on already constrained inventories, prompting an increase in manufacturing and a rebound in the service industry.

While progress is on the horizon, many areas of the economy still remain horribly depressed, and the inequality gap continues to worsen. Meanwhile, equity markets have seemingly defied gravity, and valuations appear stretched. We foresee that much of 2021 earnings have been pulled forward, and therefore dampen our performance expectations in the U.S. going forward. Yields in U.S. fixed income also remain unquestionably meager, with some questioning whether the asset class can play the role it has traditionally served. Across the pond, valuations look more enticing, especially in emerging markets, which have fared less worse through the pandemic and will continue to benefit from a weakening dollar.Europe, stalled negotiations on fiscal policy, and renewed uncertainty around Brexit, which further added to investor caution. All in all, the trajectory of the recovery is still unclear.

Third quarter real GDP rose 33.4%, a record quarterly increase, following the 2Q20 record drop of 31.4% (both annualized). As of Sept. 30, the year-over-year decline was 2.8%. Fourth quarter and 2021 GDP projections vary and are dependent on the degree to which lockdowns are reinstated, the timeline for broad distribution of a vaccine, and the nature and timing of additional fiscal and/or monetary stimulus. The Conference Board estimate for 4Q real GDP is 2.8% (annualized), bringing its full-year estimate to -3.6%. Broadly, projections for 2021 growth generally fall between 3.5% and 4.0%. The recent passage of the aptly titled Coronavirus Response and Relief Supplemental Appropriations Act provides a needed boost, but many economists feel that more is needed. The roughly $900 billion package includes more aid for small businesses, an 11-week extension of federal unemployment benefit programs with an additional $300 per week, and a $600 stimulus payment for qualified individuals. Notably, aid for states and municipalities was not included.

The unemployment rate, which peaked at 14.7% in April, fell to 6.7% in November. However, 22 million jobs were lost from February to April, while only 12 million have been added since. Lower-income, less-skilled, and tourism-related jobs have been the hardest hit, increasing concerns about the widest income inequality gap in history, further fueled by climbing stock prices. On the hopeful front, the need to replenish low inventory and a positive outlook for capital spending may support employment growth in coming months.

The Federal Reserve Board left its Fed funds target rate unchanged (0.00% to 0.25%) at the December meeting and reiterated its belief that the course of the economy depends on the pandemic, which continues to ‘‘pose considerable risks to the economic outlook over the near term.’’ It further committed to continue monthly purchases of both U.S. Treasuries ($80 billion per month) and mortgages ($40 billion per month) for the foreseeable future. Current projections remain for no hikes until 2023.

While year-over-year inflation remained low (CPI: +1.2%; Core: +1.7% as of November), the breakeven spread for 10-year Treasury Inflation Protected Securities widened to 2% at yearend, the highest since 2018 and sharply higher than the 0.5% level hit in March 2020. Concerns over the Fed’s ballooning balance sheet, approaching $8 trillion, as well as expectations for increased stimulus, have fueled worries over future inflation. The Congressional Budget Office projects that the 2020 U.S. fiscal deficit will be roughly 15% of GDP, the largest since 1945.

Outside of the U.S., recoveries have been mixed with Asian countries being the furthest along. Purchasing Manager Composites, which gauge activity in both manufacturing and services, remain at or below 50 (signaling contraction) in many areas (Japan, the U.K., and the euro zone). According to projections from the Organization for Economic Cooperation and Development (OECD), several countries are expected to experience real GDP declines for 2020 of roughly 10% (U.K., Argentina, France, Italy, Mexico, and India); China is an outlier at +1.8%. At its December meeting, the OECD released its new predictions: -4.2% in 2020 and +4.2% for 2021. While the 2020 forecast is slightly improved from the -4.5% September projection, the 2021 outlook has worsened (from 5.0%). China (+8.0%) and India (+7.9%) have the brightest prospects for 2021, according to the OECD

In recognition of the continued pandemic toll on economies, the European Central Bank announced that it will increase the size of its asset purchases by €500 billion to a total of €1.85 trillion ($2.21 trillion) and will continue asset purchases at least through March 2022. With respect to Brexit, the last minute ‘‘EU-UK Trade and Cooperation Agreement’’—–passed on Christmas Eve—–paves the way forward but leaves much uncertainty. Further, implementation is likely to cause some disruptive snags given new customs and regulatory checks, and many details still need to be worked out—–including a trade deal with the U.S.

CLOSING THOUGHTS As we closed in our last letter, Donkeys and Elephants will come and go, and so will other animal spirits. It seems fitting that China sent us a ‘‘gift’’ in the form of the Coronavirus at the start of 2020, as they also gave us the ‘‘Year of the Rat.’’ While most people would find a rodent unappealing, the rat is actually a sign of prosperity and wealth, which proved eerily accurate when it came to the performance of the equity markets. Perhaps that was supposed to be some sort of consolation prize for the massive upheaval we have all endured in our lives. Looking ahead, we start 2021 with a new four-legged creature, as we embark on the ‘‘Year of the Ox.’’ This stalwart beast is defined by its strength of character and unwavering determination, (and at times a bit of stubbornness). Americans have always prided themselves at displaying these noble characteristics, as well as grit, fortitude, and heart. As we launch ourselves into the future, I strive to remind myself what the red, white and blue stands for, in what seems to be a never-ending haze. At the end of the day, all Americans’ hearts bleed purple, and so does the rest of the world. We will get through this, our eye is on the long-term, and endurance is the name of the game. This is why we structure our clients’ portfolios with stamina in mind, to protect against the challenges of today and those that lie ahead.

Real Assets
Real assets posted strong returns in 4Q though most indices remain in the red for the full year. The Bloomberg Commodity Index gained 10.2% and the more energy-heavy S&P GSCI Index rose 14.5%. Full-year returns for these indices are -3.1% and -23.7%, respectively. Gold took a breather and was roughly flat for the quarter but is up over 20% for the year. Oil prices continued to recover from the spring plunge; Brent Crude closed the year at over $50, a sharp increase from the $20 level hit in April. The Alerian MLP Index benefited, gaining 32.4%, but it is down nearly 30% for 2020. REITs also did well during the quarter but fell over the year (FTSE Nareit: +11.6%; -8.0%). TIPS (Bloomberg Barclays TIPS: +1.6%; +11.0%) outperformed nominal Treasuries for the quarter and the year. 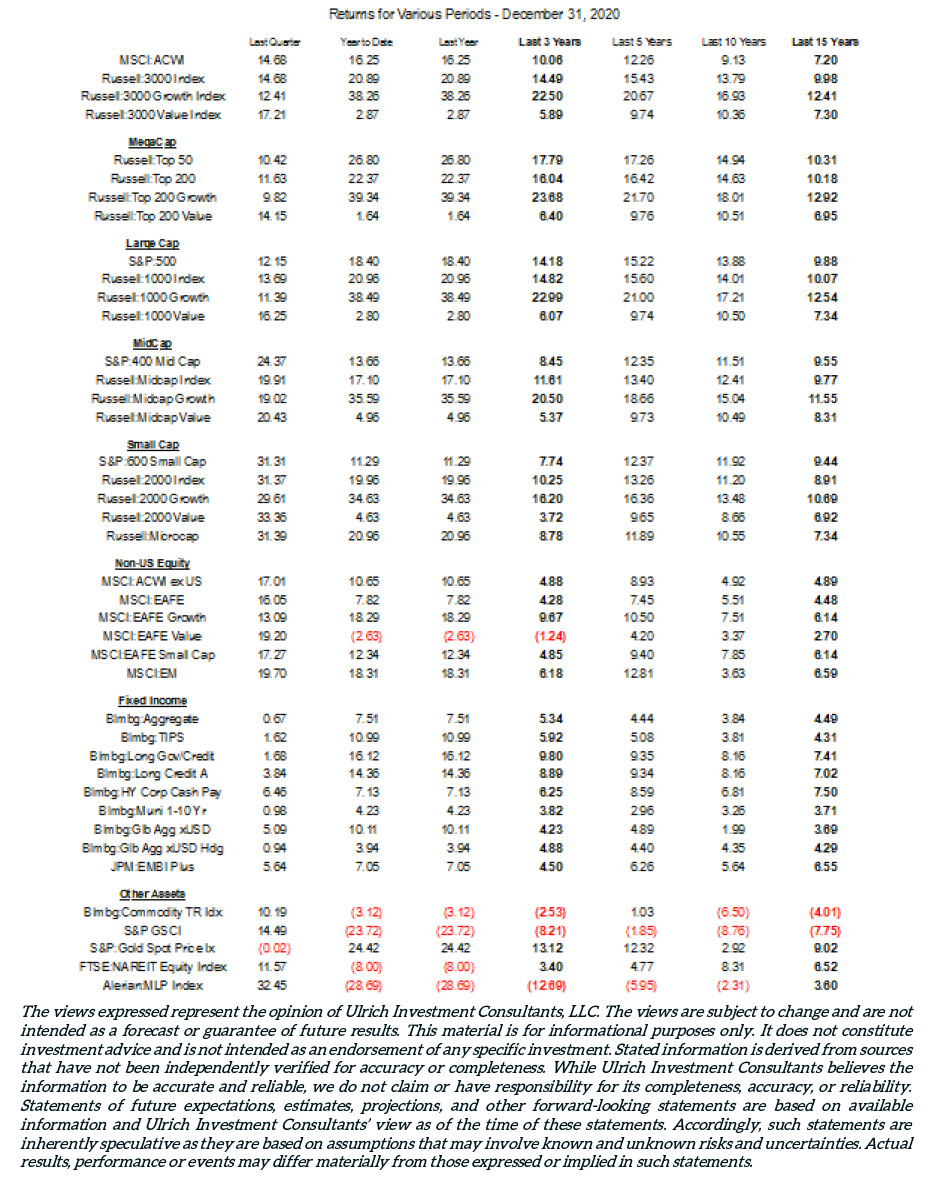